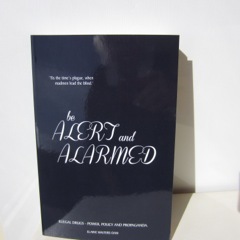 be Alert and Alarmed

In her latest book "be ALARMED and ALERT" Elaine Walters documents the geneses of thepolicy of Harm Minimisation. She takes the reader step by step through a labyrinth of complex and largely unsuccessful harm minimisation strategies that she maintains have actually exacerbated the drug problem in Australia. She also traces the origins of pro drug crusaders who have been on a mission since the early eighties to change the law. She provides evidence to support her claim that for years some 'experts' from the drug and alcohol agencies and government departments have undermined and understated the inherent dangers of psychoactive drugs particularly marijuana.

Furthermore she reveals how the 'language' that is accepted as a normal part of the public conversation ­ soft drug, recreational use, safe injecting rooms needle exchange and even the phrase Harm Minimisation actually originated from the drug culture itself. Most importantly the information in the book give parents and teachers answers to many of the questions that young people are asking. Particularly when discussing the reasons it is necessary to maintain legal sanctions on street drugs.

Books are $30 inclusive of postage and are available in selected book stores and online www.elainewalters.org

Save this product for later